With the RDP occupying a critical place in the ANC’s election platform, the question for the newly-elected government was whether it was a set of goals and objectives that could be assigned to the various departments and ministries and coordinated by Cabinet and its committees, or whether it would be best implemented as an integrated programme that required a central structure to actively ensure that it informed the work of government as a whole.

The second approach was adopted by the ANC late in process of forming the Cabinet, after an intense debate and lobbying by its proponents, in particular COSATU. Jay Naidoo recalls that Mandela asked him to lead the office for the reconstruction and development programme, as minister without portfolio in the president’s office – saying, ‘We have a big task ahead. You have been driving the formulation of the RDP from my ANC Office and now I want it to be the centre of all our programmes’.200

The ambiguity in the institutional position and role of the RDP ministry and its office located in the presidency, compounded by its last minute addition to the executive, affected its performance and created conditions that played a part in dissolution of the RDP office and ministry after less than two years.

The ministry was allocated R2,5 billion as an RDP Fund in the first budget, with provision for an additional R2,5 billion for each of the following five years. The funds in the first year came from the budgets of departments that would be implementing RDP projects, to be reallocated to them for these specific projects by the RDP office. Derek Keys, who had proposed the budget, doubted if the arrangement would survive long, foreseeing tension between the minister without portfolio and the line-function ministers.201

There were some early indications that the initial arrangement was a temporary one. Mandela explained to Parliament in August 1994:

The RDP Fund should be seen as a temporary measure. Funding from a special instrument should taper off as the Ministries themselves redirect their spending and give their operations a reconstruction and development character. The identified projects are now being subjected to analysis to ensure that their carry-over costs and recurrent expenditure are accommodated in the 1995/96 and succeeding budgets. Strict inter-departmental co-ordination will be crucial for their success.202

The complex funding arrangement which was intended to make government departments reorient their priorities, did nothing to lessen the tensions. The RDP office was also hampered, as a completely new structure, with insufficient staff.203

The challenges notwithstanding, the projects which Mandela announced in his first address to Parliament in May 1994, gave impetus to the RDP and made an impact on especially poor communities in primary health care, school nutrition, access to electricity and the initiation of Presidential Lead Projects. By the end of 1995, however, there were concerns, in government and amongst non-governmental organisations, over the pace of implementation; and worries – contested by the RDP office – about unused funds allocated in the first-year of the expanding five-year budget.204

The decision in mid-1995 to put greater focus on economic growth – discussed earlier - and with it the need for a more powerful authority within government to implement the new priorities, also meant a shift from the RDP as oversight and coordination point of government reprioritisation.205

Despite these developments, Mandela’s announcement of the closure of the RDP office came as a surprise. The resignation of Chris Liebenberg as finance minister after the period he had agreed to serve, became the moment to reconfigure how the RDP fitted into government operations. A few days after Liebenberg’s budget had been debated, Mandela convened a special sitting of Parliament to announce both Liebenberg’s resignation and the closure of the RDP office, together with a Cabinet reshuffle.

The reshuffle put Trevor Manuel and Gill Marcus in finance as minister and deputy and moved Alec Erwin from deputy minister of finance to minister of trade and industry. With the closing of the RDP ministry and the change in finance from non-partisan Liebenberg to ANC Manuel, the interim constitution’s allocation of posts to parties in the Government of National Unity dictated that one ANC minister had to be dropped, either Jay Naidoo or someone else. Jay Naidoo was retained, preserving at least government’s perceived link with COSATU . He took the place of minister of posts, telecommunications and broadcasting, Pallo Jordan (who was back a few months later as minister of environmental affairs and tourism when the National Party left the Government of National Unity).

When he announced the closure of the RDP office, Mandela said that it did not mean abandonment of the RDP: the RDP remained ‘the lodestar which guides all Government activities’. He said that the RDP office had, through the work it has done over the two years, accomplished its mission. 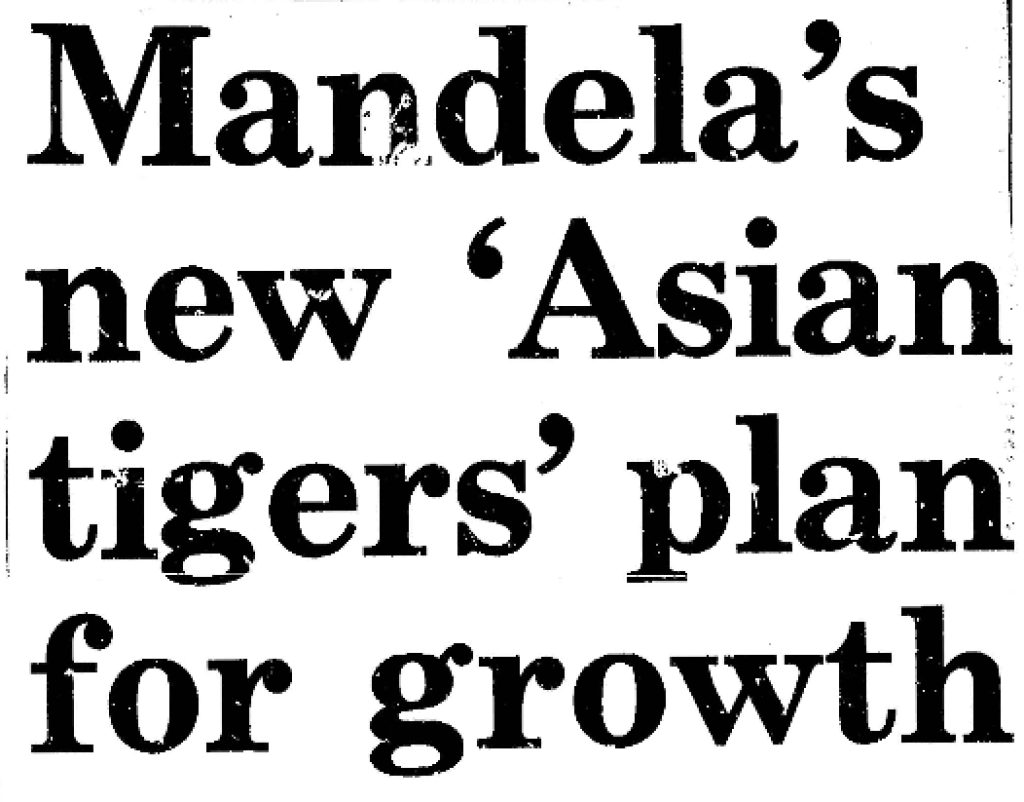 Unity within the Cabinet itself has strengthened as we worked together to identify national priorities, on the basis of the RDP, without being over-constrained by exclusive commitment to the Departments we happen to head.

As a result of the evolution of policy affecting all the Departments of State and the implementation of some institutional changes to give us the necessary capacity to implement those policies, the possibility has increased greatly for the Departments each to implement the programme of Reconstruction and Development within the area of its mandate.. . .

The RDP Office will be closed down. I have instructed Deputy President Mbeki to handle the matter of the relocation of the important projects, programmes and institutions which currently fall under the supervision of the RDP Office.

The RDP Fund will be relocated within the Ministry of Finance.

I have taken this decision because of the evolution within Government to which I have already referred, as a result of which the various Departments of State are better placed to focus their activities on the realisation of the objectives spelt out in the Reconstruction and Development Programme.

I trust that this change will help to concentrate our attention on the fact that the RDP is not the responsibility of some specialised Department, but the compass, the lodestar which guides all Government activities.

I would like to express my sincere appreciation to the Honourable Jay Naidoo and his colleagues in the RDP Office for the pioneering work they have done to set us on the road to the true reconstruction and development of our country.206

Jay Naidoo had been informed of the closure of the RDP office and his reassignment to another ministry just hours before Mandela made the announcement in Parliament: he was, he says, stunned.207 Some years later, he spoke of some of the governance factors at play:

We had an anticipation that the president's office in a sense would become a coordinator of an integrated effort. In the first instance that did work and it was the intention that that was only a temporary thing; that once you'd established a common policy framework and restructured both the budget and the civil service, the need to try to create a centralised, more integrated planning process would fall away. The reality is that there were territorial issues which I think was one big issue. …. I didn't feel that I was making much of an impact in a portfolio that really had to work with a whole range of ministries and that's a challenge Thabo still faces, how it works in an integrated way. We haven't solved that issue.208

The surprise of the change and absence of consultation within the Tripartite Alliance – ANC, SACP and COSATU – drew negative reaction, and was interpreted by some as an abandonment of the RDP as such. In time the change came to be interpreted as linked to developments in macroeconomic policy, and as part and parcel of what was seen as a substantive shift in policy. (See Chapter on Social Transformation)