Angered by the circumstances in which a black Soweto policemen was shot dead in February 1995 by white police colleagues, Deputy Minister Winnie Madikizela-Mandela made a statement at his funeral which drew the first of a series of actions by the president that culminated in her dismissal from the Cabinet. For Nelson Mandela, the action he took was amongst the most emotionally difficult – it meant taking action against someone for whom, though estranged, he felt love and who had given him an anchor of support during the years in prison; whose role in the struggle he admired and who had strong support in the ANC.

When black police-officers in Soweto went on strike to protest at racism they were experiencing within the service, the station commander called in the Internal Stability Unit. A tape of radio communications after the engagement which resulted in Warrant Officer Xaba’s death recorded open racism. At his funeral Winnie Madikizela-Mandela was reported as saying that government had failed people such as Warrant Officer Xaba because it had not removed racism from the work place, and that it was time to address people’s expectations that apartheid imbalances would be addressed.222

Nelson Mandela took exception to the statement that the government had failed people and a week later, after consulting with ministers, deputy ministers and senior ANC officials, a statement was issued. 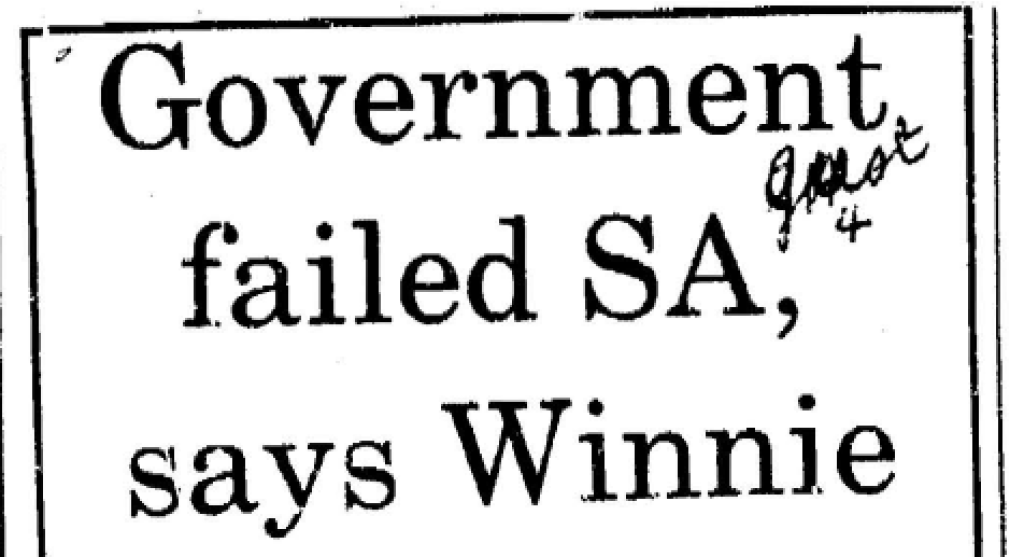 The criticism was, in the opinion of the President, inconsistent with her position as a member of the government. In keeping with his constitutional responsibilities as head of Government, President Nelson Mandela called on the Deputy Minister to publicly retract her statement and apologise to the Government.

The President has accepted the apology.

President Nelson Mandela views in a serious light any acts of commission or omission, on the part of Government officials, which convey an image of disregard or disrespect for the policies and decisions of the Government of National Unity. In accordance with the fundamental principle of cabinet collective responsibility, should this happen, now and in the future, the President shall not hesitate to act firmly against any transgressors.223 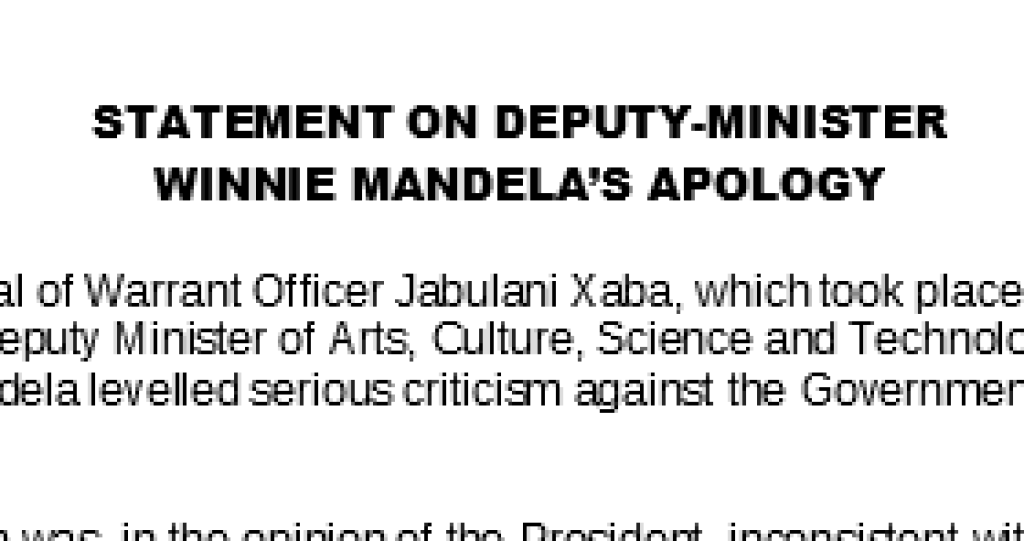 A month later there was another statement, this time announcing her dismissal after consultations within the ANC nationally and in the provinces. In the background, though not mentioned in the statement, was further criticism of the government, and a visit to West Africa by the deputy minister that had not been authorised by the president, as was required by executive protocol. As a statement by the president’s office explained: ‘it often happens that ministers and deputy ministers depart on official visits abroad prior to the correspondence with the president's office having been formally finalised. In this particular- case, Deputy President Thabo Mbeki, acting on behalf of the President, had advised the deputy minister not to undertake the trip to West Africa. The deputy minister subsequently wrote to the president explaining why it was Important to proceed with the trip. The deputy minister departed, as scheduled, before the consultation on her resubmitted request could be completed.’224

The announcement of dismissal was brief. 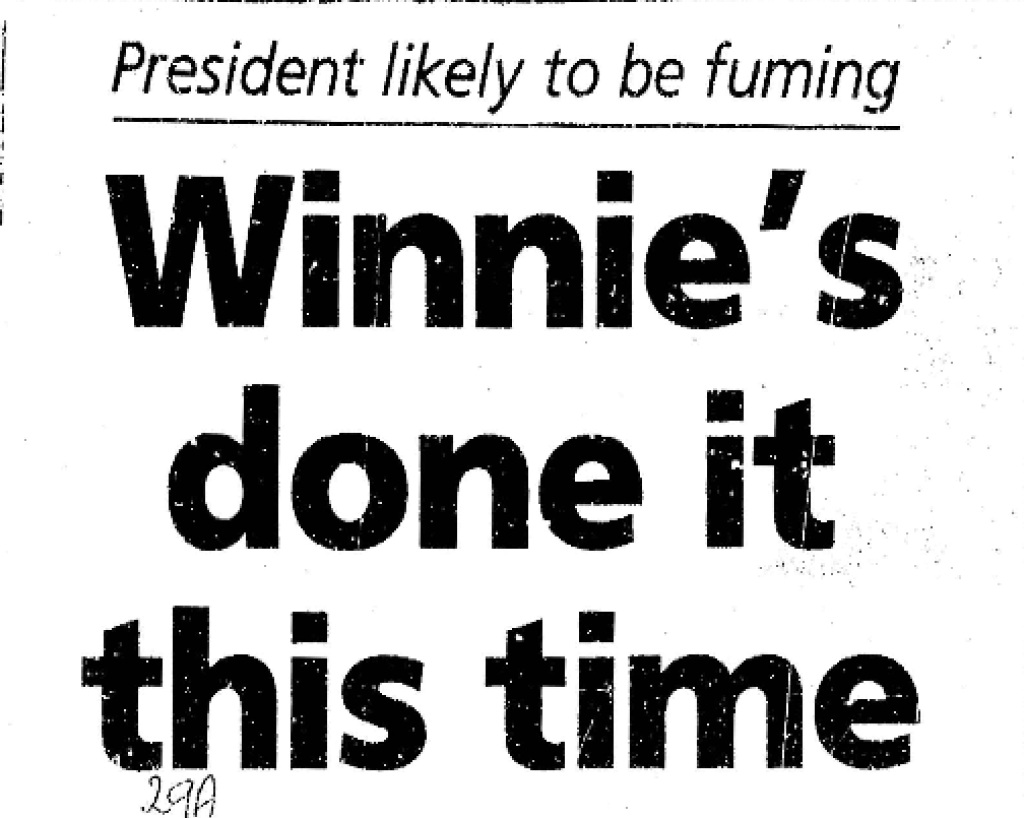 As President of the Republic, Head of the Government of National Unity and leader of the ANC, I have relieved Nomzamo Winnie Mandela of her position as Deputy Minister of Arts, Culture, Science and Technology.

This decision has been taken both in the interest of good government and to ensure the highest standards of discipline among leading officials in the Government of National Unity.

I have taken this decision after much reflection, given that Comrade Winnie Mandela has, in the past, played an important role in the struggle against apartheid, both in her individual capacity and as a leading member of the ANC and the rest of the democratic movement.

I hope that this action will help the former Deputy Minister to review, and seek to improve on, her own conduct in positions of responsibility, so as to enable her to make the positive contribution to society, which her talents would enable her.

In order to ensure the smooth functioning of government and uninterrupted service to the nation, I have appointed Brigitte Mabandla as the Deputy Minister of Arts, Culture, Science and Technology. She will assume this position with immediate effect.225

225 Statement by President Nelson Mandela on changes in the Ministry of Arts, Culture, Science and Technology, 27 March 1995.

But the dismissal was challenged on procedural grounds. The constitution required that such a decision by the president should be taken after consultation with the two deputy presidents and leaders of all the parties in the Cabinet. Wanting to avoid leaks, the president delayed the consultation as long as possible. When at the last minute he wanted to consult Buthelezi, he could not contact him and so consulted a senior member of the IFP. Although advised that the consultation met the legal requirements, Mandela decided that ‘the dismissal of Mrs Mandela should be treated as technically and procedurally invalid.’ He did so out of commitment ‘to act within the spirit of the Constitution and, further ... to spare the government and the nation the uncertainties which might follow protracted litigation on this issue.’226

When the president returned from his foreign visit, the deputy minister was dismissed for the second time, and finally – with correct procedures having been strictly followed.

226 Statement on the reinstatement of Mrs Winnie Mandela issued by the Acting President, 12 April 1995.

I have … had the opportunity to consult fully with the Deputy Presidents and the leader of the Inkatha Freedom Party; and considered the papers filed in her court application for reinstatement…

I have decided, in accordance with the powers vested in me by the Constitution, to terminate Mrs Winnie Mandela’s appointment. ….227

227 Statement by President Nelson Mandela on changes in the Ministry of Arts, Culture, Science and Technology, 14 April 1995.

The dismissal was to take effect on 18 April – on the day before that, Winnie Mandela called a media conference and announced her resignation.228