The minister of finance was one of the posts in government regarding which Mandela – and the ANC – had, before the 1994 elections, assessed as one which would have particular impact on attitudes of those who controlled the levers of economic power. Given the dire and worsening state of the economy and the need for investor confidence, domestic and foreign, as well as the entrenched power of the existing economic forces, virtually all of whom came from the white community, he decided to move cautiously.

The finance ministry was one of those positions which the ANC had decided not to change immediately ‘because the country may not be ready for it’. But it was a strictly temporary arrangement. Carefully and in detail Mandela steadily managed the transition over a number of years to a point at which these institutions were led by people from the ANC as the majority party.

At the same time the roles and responsibilities of ANC leaders within its own structures were preparing them for the finance posts temporarily left to their pre-democratic occupants. Leadership of the ANC’s Department of Economic Policy, service in the Finance Sub Council of the Transitional Executive Council and chairing Parliament’s Portfolio Committee on Finance were steps on the paths of Trevor Manuel, Tito Mboweni and Gill Marcus to the Finance Ministry and the Reserve Bank. Trade unionist and former economics lecturer Alec Erwin was appointed as Derek Keys ’ deputy in the finance ministry and later in trade and industry.

When Derek Keys told Mandela after just a few months that he had to resign, for personal reasons, Mandela called an early morning meeting.

On Saturday [2 July 1994] at about four in the morning I got a call, ‘Hello Trevor, I hope I didn’t wake you. Can you come to see me? Just take the first flight and come.’ Our offices were not yet properly established; I had a cell phone from the April election campaign but PAs didn’t have cell phones. How at four o’clock in the morning do you try and get on an early morning flight! But I did it, called drivers, came to Pretoria and came to Mahlambandlopfu.

Thabo and Tito, were there, maybe Alec. Madiba said, ‘Chaps, you know Derek came to see me and told me that there are certain reasons why he can’t stay on Cabinet. It’s not political. I’ve given him the benefit of the doubt but I must find a new finance minister. Look, I’ve been talking to people and I don’t think the country and the world and white people in particular are ready for an ANC finance minister. I hope that you agree with me. I thought I must tell you this and ask if you have any suggestions for a finance minister.’

We looked at each other and he said, ‘You know, I’ve been thinking about this fellow Chris Liebenberg, he is retired from that bank, he’s been my banker and he’s been the ANC’s banker. He’s a very good man. White business will really support him. Do you have any difficulty with him?’ None of us had difficulties. He said, ‘Thank you very much. Let’s have some tea. You chaps can leave.’194

It was a time at which the challenge of attracting the international investment the country needed was becoming evident, and a banker known to the international community, as Liebenberg was, was seen as something that would help.

Out of the blue, in 1994 - I had just retired from Nedcor as chief executive having reached retirement age and was then chairman of the Credit Guarantee Insurance Corporation - in the middle of a board meeting I got this phone call, saying the president would like to see you.

It was Mandela saying, can I see him that night. I said, ‘Sure, what time would you like to see me?’ ‘

‘Well, I have a dinner with Mitterand,’ he said, ‘can we make it after that dinner?’ ‘That’s fine’, I said, thinking that he was in Johannesburg. It was four o’clock in the afternoon.

So told him, ‘But President, I am in Johannesburg, I am never going to make it to Cape Town in time.’ And he said, ‘Well, try.’

I got there, we had an 11 o’clock meeting and he said, ‘You have probably heard the rumours.’ ‘No, what rumours are you talking about?’ He told me that Derek Keys had resigned. ‘I honestly haven’t heard,’ I said and then the penny dropped. I knew now why I was there.

He said that he wanted me to succeed Derek but I declined, ‘When I retired, I promised my wife, and I have told many people, that I will never enter politics.’ He said he would speak to my wife and I told him, ‘No, I can handle that myself. But I don’t want to be a party politician.’ He replied, ‘I think I can handle that.’

Liebenberg gave his answer the next evening in Johannesburg, on the side of another reception in honour of Mittterand, in Johannesburg. When Mandela left the consultation there was an obvious spring in his step. Liebenberg had accepted, on the understanding that he would remain politically independent; that the RDP needed to be successful, there would be discipline in both monetary and fiscal policy and that for that period the government’s economic policies would remain ‘market-related’.196

Because Liebenberg was neither a Member of Parliament nor affiliated to any party, the Constitution had to be amended to allow the president to appoint him as a minister. And, as Mandela kept to his undertaking that he would release him after the next budget, a few months later there was another succession to manage.

In August 1995 – about seven months before Liebenberg would be leaving – Mandela called Trevor Manuel to a meeting and told him he wanted him to be minister of finance when Liebenberg left. He said that as the first black minister of finance people would find fault with him, but he had several months to prepare so that there must be no gap – he would need, in addition to his job as minister of trade and industry, to learn what the finance ministry does.197

He also told Manuel that he had to ensure that he shadowed Liebenberg without anybody knowing what’s going on. This was facilitated by the establishment of a committee in which Manuel participated with ministers working on the budget. He also told Manuel, who had been attending annual meetings of the World Bank and IMF each year since 1991, not to do so during 1995 lest his attendance invite speculation.

Madiba would call me from time to time and ask, ‘How is it going? Are you following Chris? Are you ready, are you taking an interest in this matter?’ In March ’96 he called me more regularly. And then he said, ‘Okay, it’s all systems go, I’ll announce this at the end of Chris’s next budget which is the end of March, but there will be a few changes I need to tell you. I think Alec has learnt very well in finance and I want to move him to trade and industry in your position, but don’t talk to him yet. You will need a deputy and Gill is doing very well in the portfolio committee and I want to move her there, and don’t talk to her either.’ Then he called me about the 19th or 20th of March and said, ‘You can talk to Gill but not Alec.198

Three years down the line another succession with sensitive economic implications would need managing. Chris Stals who had in 1994 been retained as governor of the South African Reserve Bank from the pre-democratic era, was due to retire in 1999. As with the finance ministry, replacing Stals by a black governor from the ANC would, given business attitudes, need managing. A year before Stals was due to retire, the Presidency announced that Tito Mboweni would succeed him, and that he would until then serve as an advisor to the governor. There had been consultation in the previous months by Thabo Mbeki among business leaders.199

The announcement came in the midst of a period of selling pressure on the Rand, prompting media speculation that the timing of the announcement had been brought forward to halt that problem. The appointment was broadly welcomed in the light of Mboweni’s record as minister of labour. Known as a combative public figure, in his new position he said he would ‘shut up’, in line with communication advice from the Presidency that the transition would be assisted by a more modest and low-key public stance.

In August 1999, shortly after the end of Mandela’s presidency, Tito Mboweni became the first black governor of the Reserve Bank. 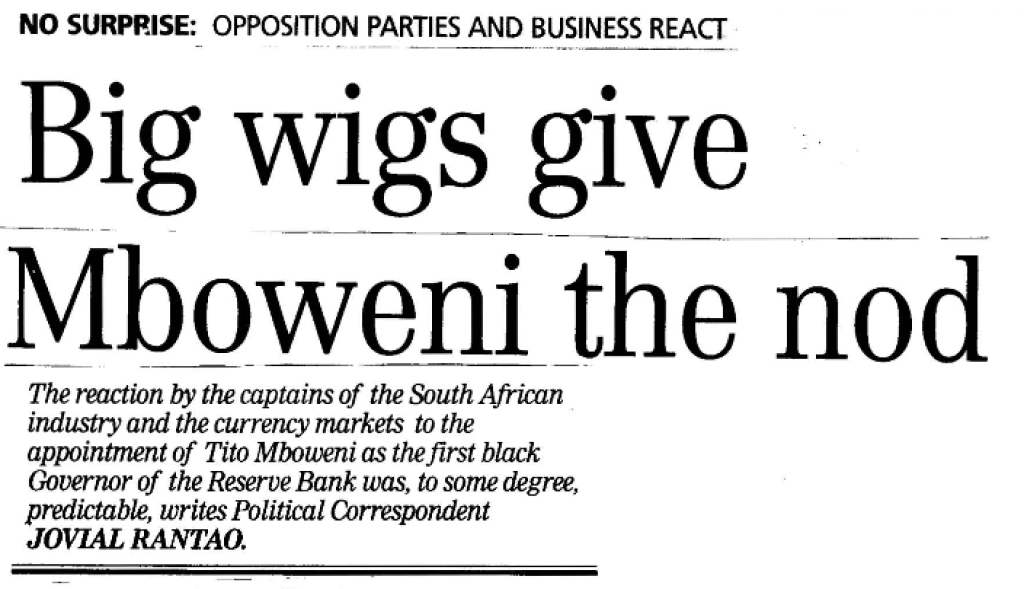