Friction over boundaries to disclosure and rebuttal of inaccurate reporting are the stuff of everyday relations between governments and media. But when these intersected with the matter of transformation of the South African media, the result was a sequence of angry moments and differences. There was little room for resolution given the protagonists: journalists confident that their professionalism made the charges an impossibility and Mandela convinced that negativity about the ANC-led government was something akin to rearguard action, witting or unwitting, in defence of past privilege.

Why the media needed transforming was spelt out in Mandela’s pre-election remarks to a meeting of the International Press Institute Congress in Cape Town in February 1994, shortly before the election.

South African media are still largely dominated by persons drawn almost exclusively from one racial group. With the exception of ‘The Sowetan’, the senior editorial staffs of all South Africa's daily newspapers are cast from the same racial mould. They are White, they are male, they are from a middle class background, they tend to share a very similar life experience. The same holds true for the upper echelons of the electronic media, again with a very few recent exceptions.

While no one can object in principle to editors with such a profile, what is disturbing is the threat of one-dimensionality this poses for the media of our country. It is clearly inequitable that in a country whose population is overwhelmingly Black, (85%), the principal players in the media have no knowledge of the life experience of that majority.594

This orientation of the media was again on his mind in 1995 as he prepared for to meet with the ANC’s top officials after adverse public reaction to his remarks in the Senate on the Shell House shooting.

The opinion of the media is important and in some respects crucial. We must always treat it with respect. The whites have powerful weapons of propaganda which we ignore at our peril. But we must never forget the people out there and our strategy must not ignore their feelings on this subject.595

The implicit expectation that editors and journalists whose background gave them awareness of the life experience of the majority would necessarily write in congenial ways soon proved false; and the emphasis of Mandela’s views on transformation shifted increasingly towards ownership as a critical factor, if not the most important.596

This emphasis on ownership reflected an ANC stance which, early in the life of the government, had led to some tension between the ANC and black journalists. The journalists felt that the ANC, believing that black journalists were powerless to report on terms other than those approved by the white owners and editors, was disregarding them and the role they had played under very difficult circumstances. The Black Editors Forum (still an informal grouping, but soon to be formalised) initiated meetings with the ANC in August and September 1994 to try to resolve the issues.597 At one of the meetings Mandela supported the call for affirmative action in the media and appointment of more black editors. The journalists regarded the meeting as very positive and encouraging. ‘We were all eating out of his hands.’598

Two years into Mandela’s Presidency, there was a period of sharply critical media commentary, including by some black journalists. It focused among other things on the expulsion from the ANC of Bantu Holomisa and his dismissal from the government; and allegations that the Minster of Health, Nkosazana Dlamini-Zuma, had presided over improper use by the health department of public funds in the procurement of the AIDS education musical Sarafina. Mandela interpreted it as part of a systematic media campaign against transformation of the country and against the ANC. He made two charges against black journalists, introducing a dimension that troubled relations with the media for a year or more. 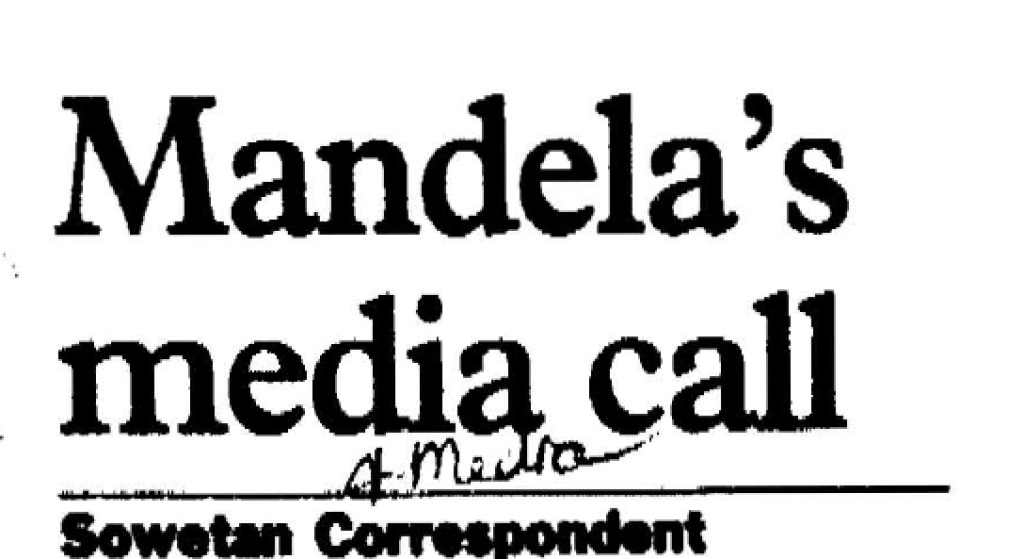 It was quite a robust exchange

I have singled out some senior black journalists. What you are having today is a type of senior journalist, and there are a few, who regret that we have destroyed white supremacy in this country. And who are taking out their venom on the one organisation that has brought about radical changes in this country. They have no conception of the problems facing the country. As I said before, they think – they assume – that we defeated whites on the battlefield and that the whites are now lying on the floor helpless and begging us for mercy.

We had to adopt a strategy to side-line, to marginalise, those elements which wanted to stop the elections by force. Some senior journalists are not even aware of that. And it’s only a few senior black journalists.599

The other charge was that some black journalists had been coopted by backward looking interests. He put to paper in a note the thought that he repeated publicly on several occasions:

Both black and white journalists are waging a biased and venomous campaign against the ANC, tempting us to conclude the real issue is not so much what the organisation has done to Bantu Holomisa.

The mass media and some opposition parties are conducting a malicious vendetta against the entire process of transformation generally and in particular against the ANC and its allies. Even some senior black journalists have been co-opted into this sordid affair. The real issue is not any ‘mistakes’ made by Nkosazana Zuma or any other person.

Traditionally white parties and their surrogates are bitter against the democratic movement for having destroyed white supremacy and the privileges monopolised by the former ruling minority. The tragedy is that even some senior journalists have been co-opted... One of them was disarmingly honest and frank when asked by senior ANC leader. He said the ANC neither paid nor promoted him as a journalists, his newspaper did.

The unprecedented bias in commenting on public affairs has never been more clearly illustrated than in the case of maverick Bantu Holomisa. They have taken advantage of this political naivety and used him as an instrument to destroy the ANC; and totally ignored the basic facts which ought to inform objective comment.600

The political report he presented to the ANC’s 1997 National Conference included a brief summary of the complaint.

Even a cursory study of the positions adopted by the mainly white parties in the national legislature during the last three years, the National Party, the Democratic Party and the Freedom Front will show that they and the media which represents the same social base, have been most vigorous in their opposition, whenever legislative and executive measures have been introduced, seeking to end the racial disparities which continue to characterise our society.601

This comment, along with warnings that some networks of the past continued to pose a security threat, and concern about the oppositional role of some NGOs, elicited a storm of criticism and dismay from much of the media and opposition parties. As he jotted his thoughts about how he would respond when he closed the conference, he came back to the question of media ownership.

The panic among opposition parties and in some editorials in response to my political report was not unexpected.

The striking feature of the NP and DP towards criticism has always been that of a bunch of individuals who have delicate skins and frail nerves; they cannot take criticism. Enlightened members of both these parties deserted them and left behind an arrogant group of unscrupulous racists, whose sole aim is to demonize the democratic movement and unashamedly to conduct a virulent campaign of disinformation’

The departure of men like > Dr van Zyl Slabbert, Alec Boraine, and Jannie Van Eck , who are now serving our country with distinction, put the DP firmly on the right of the NP.

In the NP people like Leon Wessels, Dawie De Villiers, Chris Fismer and Pik Botha could no longer feel at home with a membership that was determined to defend apartheid and its privileges for the white minority.

The confused reaction of opposition parties is also to be found in the white-controlled media whose editorials essentially mean that the President’s report was both right and wrong.

This is in sharp contrast to the Sowetan editorial which fully endorses the Political report.

This is the same media that tried to cover up the fact that a Third Force existed in this country, that now argues that there are no counter-revolutionary elements in this country.

The hostility of the white media in this country has induced principled commentators to say that South African journalists write as if they are foreigners in their own country.

Thami Mazwai, a senior black journalist, who was jailed for his principled stand and who later was elevated to the position of chairman of the National Editors Forum, tried to encourage a spirit of patriotism among his colleagues, in vain. He was forced to resign.602

All that survived of this emotion as he closed the conference was one sentence:

The response of some political parties and sectors of society, including the media to my Political Report was not unexpected; and, if anything, it confirms everything that we said.603

603 NM, Address to the closing session of the Fiftieth National Conference of the ANC, 20 December 1997, Mafikeng.