The first test of democratic South Africa’s membership of the Southern African community of nations took shape even as the country prepared for the 1994 elections. The roots of the crisis drew on Lesotho’s history as a small country landlocked by and highly dependent economically on South Africa. The apartheid regime had not hesitated to use its power to punish support for the South African liberation struggle or to contribute to political instability which by 1994 had seen seven coups since the 1970s.637

637 Parliamentary Monitoring Group, Minutes of a Report on the situation in Lesotho to a joint meeting of the Joint Standing Committee On Defence; Foreign Affairs Portfolio Committee; Security & Justice Select Committee, 2 November 1998.

Mandela became involved as clashes during 1993 between units of the Lesotho Defence Force, and opposition allegations of electoral fraud began to threaten stability. There were worries that the worsening situation could impact on South Africa’s transition as the election approached. South Africa’s foreign minister, Pik Botha, Democratic Party went to Lesotho in January 1994 at the request of Lesotho’s prime minister, and while there said that that any government formed through an unconstitutional process would not be recognised.638

President Mugabe as chair of the Front Line States was also concerned. After consulting with the SADC chair and the Commonwealth secretary-general, he convened a meeting in Botswana with President Masire, De Klerk and Mandela. It was the first meeting between Mugabe and De Klerk, and the first time Mandela and De Klerk left the country together. A joint committee of the three countries was established, to help resolve the crisis in Lesotho.639 It was that committee whose diplomatic efforts for a time arrested the burgeoning crisis and created space for Lesotho to resolve issues through negotiation.640

As the crisis peaked, in August 1994 with an unconstitutional dissolution by the king of the government elected the previous year, the three presidents intensified their engagement in shuttle diplomacy. The day before the coup, Mandela addressed a banquet in Cape Town in honour of President Mugabe who was visiting South Africa.

We are in the process of redefining the parameters of the front-line states, with a view to redefining our mission towards regional co-operation on matters of security and stability. A good start is already being laid by the co-operation between Botswana, Zimbabwe and South Africa in our attempt to resolve the situation in Lesotho. Similarly, we should join forces to lend support to initiatives that are underway to resolve the impasse in Angola.641

The following week Mandela reciprocated with a state visit to Zimbabwe.

It has not even been a full week since I bade you farewell in Cape Town. And since then, much has transpired. We had to meet earlier this week in Gaborone and today in Pretoria to try and find a lasting solution to the crisis in Lesotho. Our discussions today with both King Letsie and Prime Minister Ntsu Mokhehle have already gone a long way in achieving this objective.642

The meeting in Pretoria in the Union Buildings lasted all of seven hours. Mugabe chaired it in his capacity as chairman of the Front Line States. The secretary-general of the Organisation of African Unity (OAU) Salim Ahmed Salim was there. Opening the meeting, Mandela explained to the king and prime minister of Lesotho and their delegation that they had been invited to the meeting by the three presidents because the situation in Lesotho had been a real concern to the people of Southern Africa and beyond.643 They left the meeting having been told that the unconstitutional action of the king could not be condoned and that they had a week to find a way of restoring the situation to constitutionality.644

The three presidents worked to resolve the matter through persuasion and negotiation – Lesotho’s Prime Minster had previously requested military intervention – but as the king hesitated, South African military movements near the Lesotho border strengthened the message of likely sanctions if the king persisted. By mid-September Mandela could tell the then South African Senate: 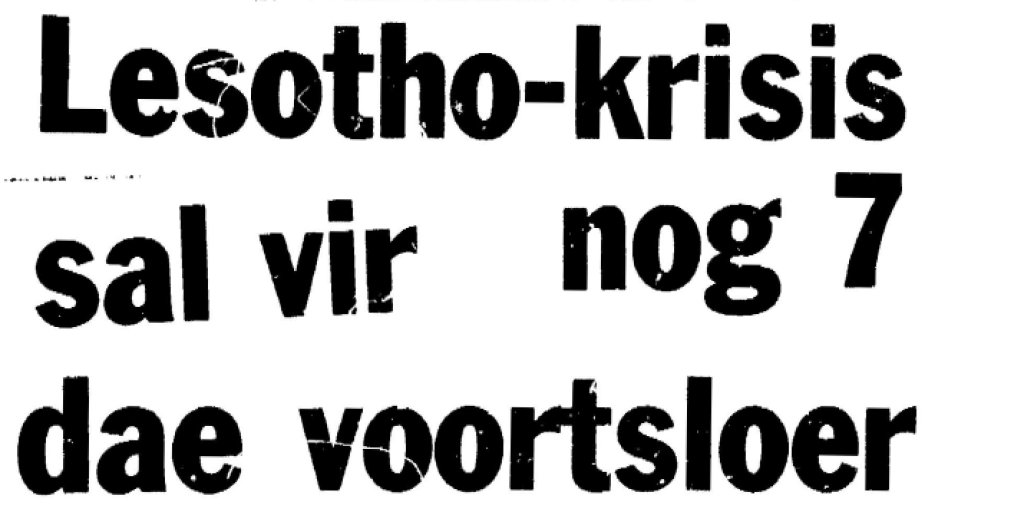 The Government has made tremendous progress in taking its rightful place in different international bodies and building healthy bilateral relations with our neighbours and other countries of the world. More recently we joined the SADC, thus reaffirming our role within the community of neighbouring nations as an equal and reliable partner. …

Like all other democratic governments, we are concerned about the current crisis in the Kingdom of Lesotho. In conjunction with our neighbours, particularly Zimbabwe and Botswana, we are pursuing the course of a peaceful resolution of this crisis with a patient determination. However, we have to be firm, so that our patience should not be misconstrued as lack of resolution.

Southern Africa cannot sit back and allow the subversion of democracy in any of our countries.

We have just received a report that the agreement between His Majesty, King Letsie III and the government of Prime Minister Ntsu Mokhehle has now been signed. There is a tremendous jubilation in the capital Maseru. We are very happy about that, because any destabilisation in our neighbouring states creates a situation of instability in our country as well. Therefore, we are very happy that this matter has been resolved.645

As guarantors of the process defined by the agreement, South Africa and the other two presidents kept close watch on implementation of the agreements including clarification of the position of the monarchy and arrangements for new elections.

And yet, when those elections took place in 1998, SADC was drawn into a new crisis. This time military intervention by SADC was deemed necessary.

The catalyst was a shut-down of government by opposition-led calling for the annulment of the election results and dismissal of the government. South Africa, Botswana and Zimbabwe, as guarantors of Lesotho's democratic process during the 1994 dispute, attempted to resolve the conflict by constituting a team of experts to help Lesotho's Independent Electoral Commission work on complaints about the election and to report back within two weeks. Delay in publishing the report and ambiguity in its conclusions, saw the situation deteriorate. In September, at the SADC summit in Mauritius, Botswana, South Africa, Mozambique and Zimbabwe were asked to monitor the situation and to take such action as was necessary to stabilise the situation.

From Mauritius, Mandela went via South Africa to New York for visits to the United States and Canada. When he was about to leave for New York from Waterkloof Airport in Pretoria he was briefed in the plane by South Africa’s defence team which had been liaising with Botswana. They conveyed Botswana’s view that the situation was unravelling and that Mandela’s decision as SADC chair was needed. He told them: Go to Botswana and discuss it and whatever the decision it must be acted on.

The minister of defence and SANDF General Nyanda went to Botswana and brought back the view that a military intervention was necessary to stabilize the situation. An army mutiny, and two written requests from the prime minister of Lesotho for intervention,646 prompted the conclusion that the political process couldn't proceed without military stabilisation of the security situation, to be undertaken by South Africa and Botswana on behalf of SADC.

The final order on South African participation was formally given by Buthelezi, acting as president while President Mandela and Deputy President Mbeki were out of the country.647 He had been consulting extensively with Mbeki and Mandela as well as the king and prime minister of Lesotho and representatives of SADC countries. He consulted Mandela again, in the United States by phone after being briefed in Cape Town by a team from foreign affairs, the ministry of defence and the SANDF. The team had just been briefed on discussions between defence and Vice-President Khama of Botswana who was handling the matter on behalf of his president. Mozambique and Zimbabwe could not attend, but they agreed with the decisions of South Africa and Botswana as long as they were kept informed of the discussion).

As Buthelezi was briefed he realised there were two views within the broader team and said he would consult the commander-in-chief by telephone. He did so, and Mandela said, go ahead, ‘But I told those chaps that if it is the decision of SADC they must go.’648

Mandela was always briefed about this thing and he approved

Buthelezi briefed the National Assembly as the intervention was taking place, and with the minister of defence briefed the Cabinet the next day. The Cabinet supported the SADC assessment that the army mutiny had created a situation of lawlessness and disorder paralysing government and endorsed the SADC leaders’ decision to deploy a joint force, premised on the rejection of any acts of unlawful seizure of power against any democratic government. It noted that South Africa had acted as part of a collective to meet obligations in terms of the SADC protocol, and also in response to a Lesotho government request. It confirmed that the aim of the operation was to stabilise the situation and create an environment in which negotiations could continue to bring about a lasting political settlement.650

Mandela, while in Canada, was asked by a journalist how long South African troops would be in Lesotho. He explained:

We cannot say how long they are going to remain and I must also point out at the outset that it is incorrect to project the image of South African troops only being in Lesotho. It’s an initiative of SADC and we cannot take any unilateral action about the troops that are there. The matter will have to be discussed with our other partners in SADC how long they should remain there and that is going to depend on the situation on the ground.651

On his return to the country from North America, Mandela emphasised the character and intention of South Africa’s participation:

How long South African troops are going to remain part of the SADC force there?

We went there not to fight but in order to ensure that these violent activities - which were illegal - were stopped so that the parties could sit down and explore a peaceful settlement. We are there for that purpose. We did not fire first.652

SADC’s objectives were achieved, and Lesotho adopted a number of political and constitutional changes, including a proportional representation electoral system to give small parties a greater say than the previous first-past-the-post system. Addressing parliament a few months after the intervention, Mandela noted the achievement.

There is no doubt that the SADC's collective initiative succeeded in creating the space for that country's political leaders to find a peaceful resolution to their differences and we ought to take this opportunity to congratulate the Botswana Defence Force and the South African Defence Force on their decisive contribution and to pay tribute to those who lost their lives.653

If this first military intervention for both democratic South Africa and SADC was successful in achieving its objectives, some operational difficulties and negative public reactions in Lesotho, South Africa and internationally, exposed the extent to which neither the country’s military posture nor SADCs provisions for interventions fully equipped them for such an operation. Questions were asked about the consistency of the intervention with the United Nations Charter. It therefore contributed in time to the development of a more appropriate approach to peace keeping and regional conflict resolution

In the meanwhile, the experience strengthened South Africa’s preference for peaceful resolution of conflict and instability, a preference that had come close to dividing SADC over the question of intervention in Zaire as it underwent its violent transition to become the Democratic Republic of Congo.