The transformation that democracy brought within reach would need the country as a whole to work together for those goals. Social formations, sectors, occupations and racial groups would need to see those goals as defining common, long-term interests within which their specific interests could be achieved. And that would require the weaving of a new social fabric, repairing a social morality corroded by the country’s past.

Although the newspapers that reached him in prison had prepared Mandela for the desperate housing and other needs, and a social fabric frayed by oppression, crime and deprivation, his joy at being reunited with the people of Soweto was tempered by dismay.

’We circled over the stadium, overflowing with 120,000 people, and landed in the centre. The stadium was so crowded, with people sitting or standing in every inch of space, that it looked as though it would burst. I expressed my delight to be back among them, but I then scolded the people for some of the crippling problems of urban black life. Students, I said, must return to school. Crime must be brought under control. I told them that I had heard of criminals masquerading as freedom fighters, harassing innocent people and setting alight vehicles; these rogues had no place in the struggle. Freedom without civility, freedom without the ability to live in peace, was not true freedom at all.

‘Today, my return to Soweto fills my heart with joy. At the same time I also return with a deep sense of sadness. Sadness to learn that you are still suffering under an inhuman system. The housing shortage, the schools crisis, unemployment and the crime rate still remain … Proud as I am to be part of the Soweto community, I have been greatly disturbed by the statistics of crime that I read in the newspapers. Although I understand the deprivations our people suffer, I must make it clear that the level of crime in the township is unhealthy and must be eliminated as a matter of urgency.’547

Five years after he returned to Soweto and lamented the crime afflicting its residents, he addressed a gathering of business representatives on the same subject. There too, he foregrounded the roots of crime among those he was speaking to, and the need for them to share responsibility for dealing with the problem.

We need a collective sense of mission to change mind-sets; and to steer the nation away from a dangerous course. Just as we extricated South Africa from the mire of conflict, we are now called upon to use the new tools at our disposal to build a prosperous, truly just and morally upright nation.

Democracy has taken root in our country and in our region, and with it have come peace and political stability. But all this will be little more than the shifting sands of illusion, if we do not take decisive measures to strengthen the moral fibre of our nation.

In this context, it is legitimate for us to examine the root causes of crime and corruption: the poverty that stares us in the face; the illegitimacy of the previous order which elevated lawlessness into an honourable deed; the sanctions era which made underhand dealings a glorified national pastime; and the low pay and repressive focus in the security and other public services which turned upon their head the moral standards that these institutions are supposed to uphold. ...

As in all our other endeavours, success in reducing crime to acceptable levels depends on a partnership of all social structures working together for common goals. In crime we have a common enemy. Criminals depend for their survival on finding refuge within the very structures of society on which they prey. Where we have scored success, it has been largely due to co-operation between communities and police.548

548 NM, Speech at the launch of Business Initiative Against Corruption and Crime, 15 August 1995

By the time this Business Initiative Against Crime and Corruption was launched, the dimensions of the country’s crime problem had become clear and the groundwork for combating it was well advanced.

The problem was not only a legacy of apartheid and struggle. As happened elsewhere in the word, transition to democracy provided new opportunities for organised crime, seized on by syndicates, some foreign-based, some involving former members of the apartheid security forces, and some former combatants of the liberation movement. Weapons were easily available, some left over from the previous conflict across the Southern African region and others now being illegally brought into the country by arms dealers. Although political violence decreased greatly, it remained at a high pitch in KwaZulu, and violence over taxi-routes continued in several areas.

The government’s response took shape in the National Community Safety Plan, deployed from early 1995 and evolving into the National Crime Prevention Strategy (see Chapter 10). It combined firm police action, supplemented where needed with deployment of the army and informed by intelligence especially where organised crime was concerned. Crucially it needed public support and cooperation.

Mandela did what he could to help mobilise society to work with the police. He regularly encouraged communities to work with the police, saying that they were no longer the enemy that they had been. He persuaded the South African Agricultural Union to work with government in a joint rural safety plan. The Business Initiative Against Crime and Corruption established a long term partnership. The National Community Safety Plan made headway in improving relations between communities and police, largely non-existent for most people under apartheid. (A survey of public attitudes rating government on its efforts to bring the police closer to communities found the proportion of Africans rating government as doing well rose from 59% in 1995 to 70% in May 1999. Amongst whites the rating fell from 34% to 24%.)549

Despite increased resources, a new strategy and gradual transformation of the police, the impact was slow apart from a big reduction in political violence. White nervousness about the transition was enhanced by the loss of the apartheid shield of the areas in which they lived. A survey by Statistics South Africa in 1997 showed that while the overall crime rate affected all sectors of the population, crimes relating to property were, not surprisingly, higher in affluent areas.550 Since this section of the population had a strong public voice through the media, the issue of crime became one of the most prominent themes in national discourse.

While the National Party was part of the Government of National Unity, it was the issue of crime that triggered most of the clashes between Mandela and De Klerk who took exception to Mandela’s explanations that the high crime rate originated in apartheid’s policing strategy. Once the National Party withdrew from the GNU, and especially as the 1999 elections approached, it made crime a particular focus.551 Media campaigns that were initiated in order to mobilise communities in the fight against crime, became at times in predominantly white areas more a means to pressure government to stop crime rather than to get citizens to work with government. There was a campaign in Johannesburg to withhold rates and taxes over crime levels. In the course of twelve months from October 1996 over 16,000 chain letters, faxes and postcards were sent to the president, most of them sent in batches from businesses and schools in mainly white areas and using identical wording,. – they reached a monthly peak of 5,000 in one month.552

Mandela regarded the opposition stance and the perception that crime was taking hold; that government was not doing enough or was losing control, as not only untrue and harmful to the country, but as an unfair and opportunistic. When the Sunday Times reported that a survey among its business section readers (self-selected) showed that half of them wanted to emigrate, mainly because of crime, Mandela said it was mainly white newspapers that made an issue of the high level of crime but were also among the first to ignore police statistics showing that crime levels were beginning to decline.553 He saw that as part of a more general negativity deriving from attachment to narrow interests, a context within which he scornfully criticised people leaving the country because of crime - ‘real South Africans’ would not run away from crime.554 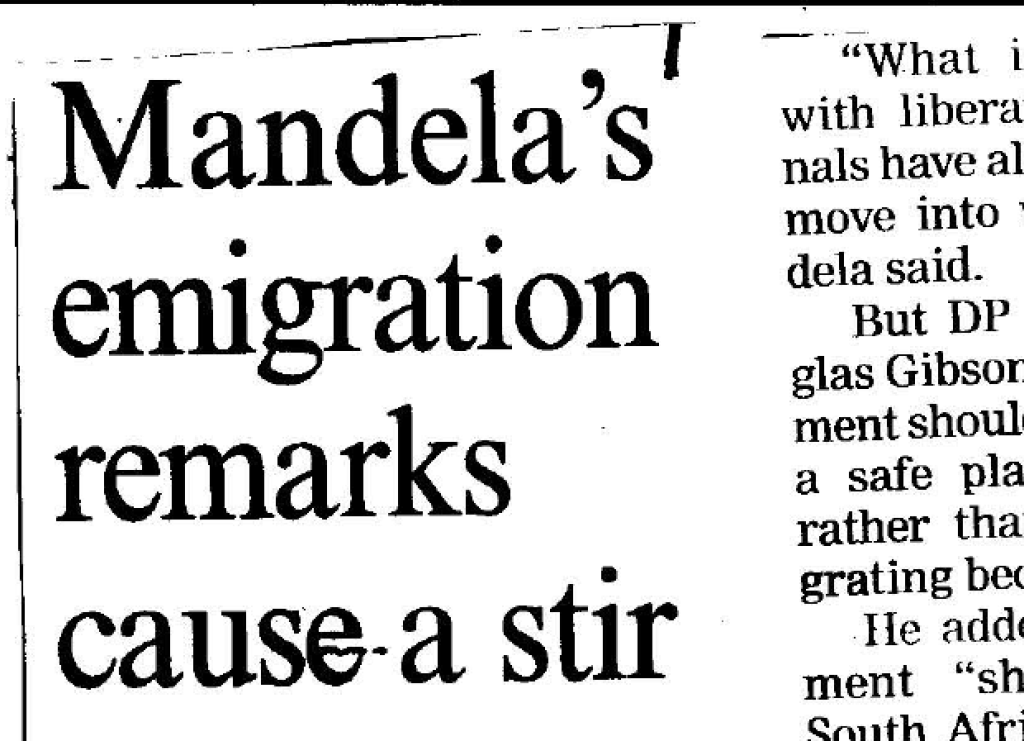 Opposition parties, some of whom created or inherited that authoritarian and repressive force, and others who condemned white supremacy, but opposed every legitimate action used by the oppressed to liberate the country, now accuse the government of being soft on crime. Hardly do they ever praise the government and business for their excellent performance and for the efficient and devoted SAPS now bequeathed to our country.

The reason for this peculiar attitude on the part of some South African politicians is not far to find. As pointed out in a previous chapter, the white minority has ruled South Africa for more than three centuries.

Some of them, drunk with power and without vision, never imagined that they would in their lifetime, suffer the trauma of losing that political power to a majority they were taught from birth to despise.

Even in the face of the far-reaching peaceful transformation that has taken place, plus the zeal with which the ruling party has promoted and implemented the policy of reconciliation, the background, education and political training of some sections of the opposition make them deaf and dumb to what is currently happening in our country.

We have shown in a previous chapter that since April 1994 our voter support has increased considerably in both the general and local government, as well as in the mega cities. All this information has made no impression whatsoever to some members of the opposition. They still harp monotonously on false propaganda which nobody else, except themselves, believe in. They criticise the government for lack of delivery, predict a split in the Alliance and accuse the government for being soft on crime. If there was a grain of truth in all these accusations, why then would our support continue to grow as it has done over the last seven years?

The so-called New National Party is on the way out, never to return. They have no leader of the calibre of former President De Klerk who had the courage and vision to take the right turn when he reached the cross-road.

But, South Africa has produced great liberals who courageously condemned apartheid. Although they disagreed with our methods of political action, and insisted that we should confine ourselves to purely constitutional forms of struggle, they were far less arrogant and destructive than some of their heirs.555

1994 was the first year in which the police made reliable and detailed statistics available to the public. Although the level remained high, the rate (per 100,000 of the population) declined till 1997 and increased slightly thereafter – it took about a decade for the measures introduced in 1995 to bring substantial decreases.556 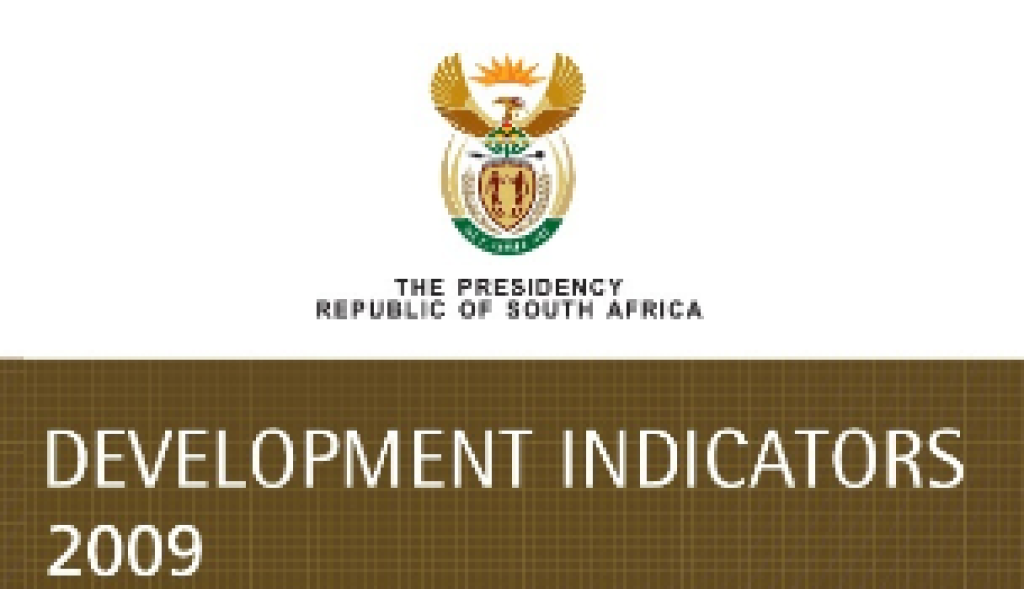