Ending violence could not be done without the active help of traditional leaders. That required persuading them that it was in their interest and in conformity with their traditional status, to occupy a role above party politics as unifiers of communities.

While that approach would be buttressed by the reform of local government and remuneration of traditional leaders, both measures faced resistance in KwaZulu-Natal, contributing among other things to two postponements of the local government elections in the province, initially scheduled for November 1995. After the first postponement Mandela consulted with the traditional leaders in December 1995, to prepare the ground for a peace summit and for a meeting with King Goodwill Zwelethini.367

The position of the king had been a factor with far-reaching consequences throughout the period of negotiations and continued to be so in the evolution of the situation after 1994. Soon after coming out of prison Mandela tried without success to meet the king. 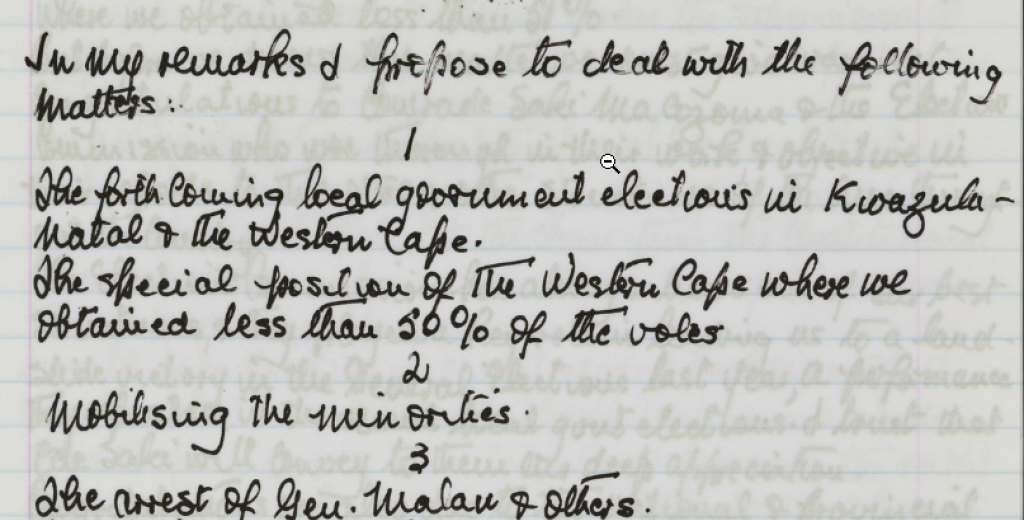 Before the 1994 elections Buthelezi had pressed, unsuccessfully, for the king to be included in governance structures as a head of state, and to be recognised in the constitution as sovereign and autonomous. When the interim constitution failed to include recognition of the king, Zwelethini rejected it. As the election date approached he pressed his case seeking concessions from both the NP and ANC.

He met De Klerk and told him he wanted a sovereign Zulu state, with the same status as Lesotho and Swaziland. Two days before the elections De Klerk assented to legislation to establish the Ingonyama Trust, giving the king trusteeship over all the land in the KwaZulu bantustan, a third of Natal’s land.

Mandela called on the king to meet with him rather than De Klerk, who he said would not be n power after the elections. On the eve of the election the king and Buthelezi accepted the ANC concessions, in particular constitutional recognition of the Zulu king – with no accompanying definition of role or powers -- and a commitment to international mediation to resolve that matter and provincial powers.

Once the IFP had agreed to participate in the elections, the king, who had until then been calling on his subjects to boycott, issued a call on them to take part. Within months after the elections and the establishment of the new government tension between the king and Buthelezi, his so-called traditional prime minister, became public, as the king increasingly asserted and then established his independence from the IFP. When IFP supporters were bussed to the palace to stage a protest while Mandela was visiting the king in September 1994 the king angrily denounced those responsible and declared that Buthelezi was not his traditional prime minister as claimed.

Relations between the king and Buthelezi improved later, but the tensions at this time were indicative of change in the relationship between traditional leadership and political parties.

While material factors played a role, such as disentangling the royal household budget and remuneration of traditional leaders from dependence on the IFP, they also marked movement on the part of King Zwelethini towards accepting a role of social and community influence above politics. In interaction with the king the ANC was saying – as it said to other traditional leaders – that as king of the Zulus, who belong to different political parties, he was the only leader who transcended these party political shades, and that his people would continue fighting each other unless there was someone who could rise above the politics.369

Following the December consultation, mentioned above, with the province’s traditional leaders, Mandela met the king and announced that he would initiate a round of urgent peace talks to prepare for an 'imbizo', a traditional meeting called by the king. When it took place in March 1996 in Nongoma, the seat of the king’s palace, Mandela made a forceful call to the assembled traditional leaders, saying it was the duty of traditional and political leaders to bring peace:

The elections took place three months later, secured by the deployment of extra troops and police, but in a climate of less restrictions on campaigning, brought about in part by the engagement of traditional leaders.

Although there were ANC complaints of intimidation and manipulation of the registration process by traditional leaders in some areas, Mandela insisted, as he had done in the 1994 election, that the election was largely free and fair.371