A fierce debate about Mandela’s office was crystallised in the report of the Presidential Review Commission, published in 1998. The commission was appointed in 1996 as questions about changing the structure of government in line with new imperatives started to arise more intensely.

Functionally, there exists what many have described to us as a vacuum at the centre of government. Somewhere between the offices of the President and Deputy President, and between these and the departments lies a space which is conventionally filled in virtually all systems of government by a central secretariat or cabinet office. The function of such an office is to ensure that issues and policies requiring consideration by the President, Deputy President and Cabinet are identified, that the ground work for their presentation is thoroughly prepared with all the relevant departments involved, that there is comprehensive and comprehensible briefing, that policies and outcomes are properly and promptly secured and recorded, that implementation follows, and that progress is effectively monitored.

Such a cabinet office does not exist in South Africa, and there is no doubt that this is one of the most urgent issues requiring remedial attention.100 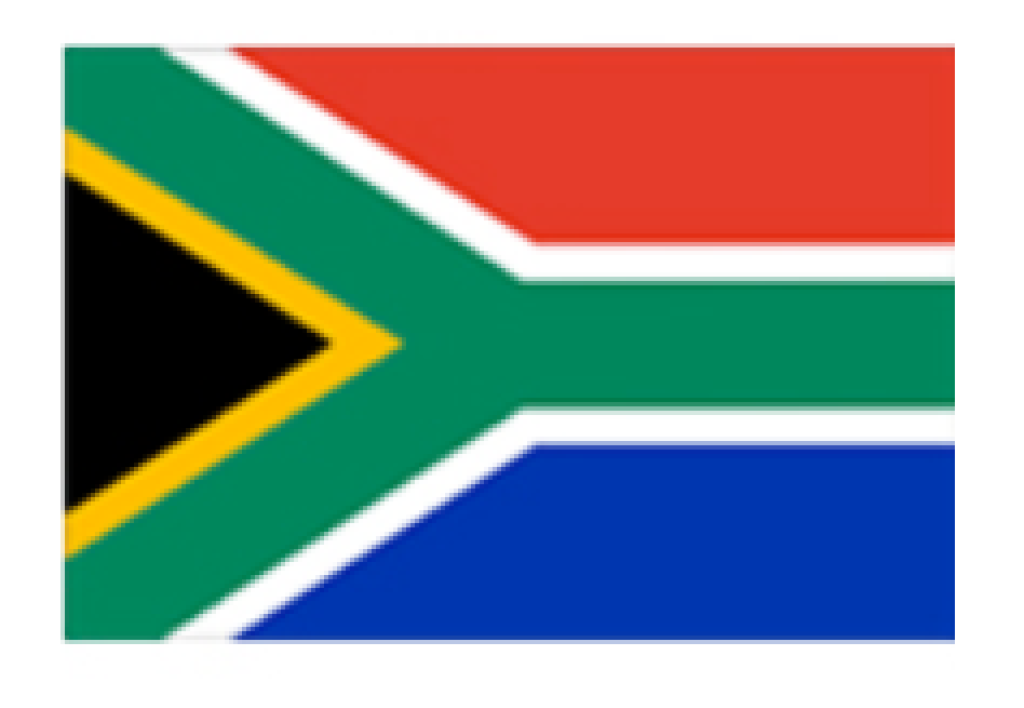 Public reception of the commission’s report focused not on these larger issues but on complaints of some directors-general that the president’s office was a source of frustration, and that was the focus of Mandela’s immediate response. ‘That is accurate and we acknowledge that weakness without qualification. We have to attend to that matter.’ Having acknowledged a shortcoming, he explained that he had resisted calls by the Public Service and Administration minister to appoint at least five or six more staff members. ‘He has said to me there is no president’s office anywhere in the world with so few members of staff.’ But ‘I have said that I have given instructions to the government and the country for belt-tightening and I must act as an example.’101

He gave a more considered response in the National Assembly. 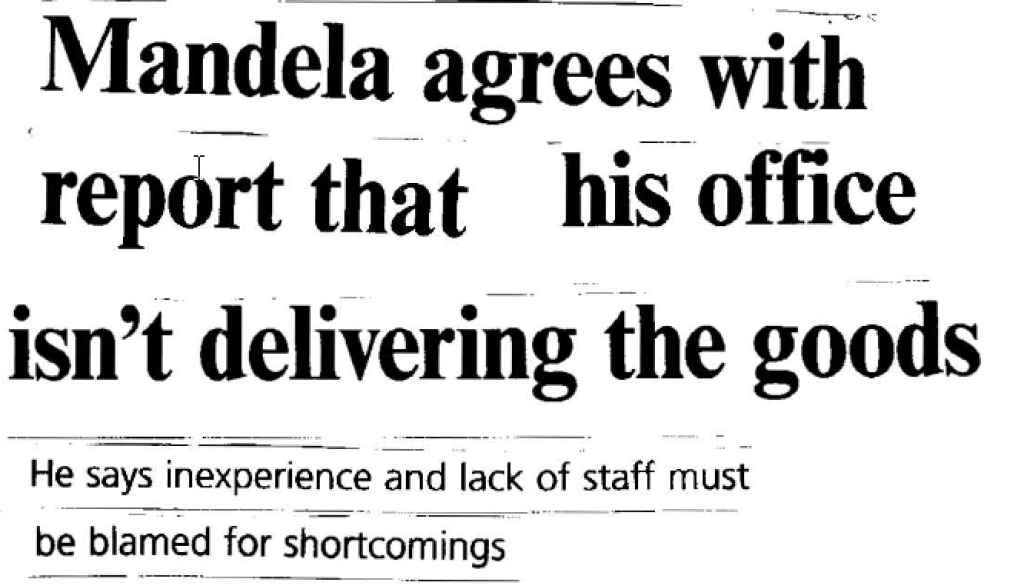 101 ‘Mandela agrees with report that his office is not delivering the goods’, Star 26 March 1998

. . .Nor should we shrink from critical comment that may be contained in the report.

It is in that spirit that I myself have been even more brutally frank about instances in which my own office may be perceived to have fallen short. And lest those comments be misunderstood, there are two things I would say.

Firstly, I have deliberately set an example to other departments by maintaining a lean structure, and I take full responsibility for this.

Secondly, we are speaking about an office which strives for the highest standards of service, where failures are recognised as such but are the exception, and which prides itself on the support it gives to departments and its relationship with the public.

But it is true of our government as a whole that those called upon to give it direction within the new democratic system could not merely direct the old. We also had to create something new to replace it, in a process that is still continuing. In this situation, it was as inevitable that mistakes would occur as it was inevitable that where the old structures still exist, many of them would fail to cope with the new demands.

Nevertheless, we have achieved more in these four years than was ever dreamt of under minority government and set standards of service, openness and accountability that were unthinkable before.

Merely to improve on the record of a minority government, though, would be a very limited achievement for a democracy, and much needs to be done to improve our work.102

By the time the commission reported in 1998, some of its recommendation for ‘a radical reappraisal of the functions, structures, personnel and management of the Office of the President’ were already being implemented. Some others were accepted in principle.

However, the commission’s report and the public focus – as well as Mandela’s reluctance to focus on his own role – deflected attention from the substance of what the president’s office said to the Commission. The submission, presented by Jakes Gerwel, set what it described as the Commission’s ‘preoccupation with co-ordination’ against a broader view of the president’s role. The submission, Gerwel explained, had been worked through with the president ‘and carries his personal authority and approval (except, he says, in those instances where the submission exaggerates his personal contribution and stature’). Expanding on this theme, he added:

President Mandela totally rejects the idea of his supposed irreplaceability, and the offensive press position of the so-called Post-Mandela syndrome which sometimes seems to assume that a black-led African government is automatically in serious danger once the rare, exceptional, Messianic specimen of the breed disappears from the scene. He, President Mandela, himself has done more than anyone to see to it that that myth is laid to rest.103

Gerwel sketched some important factors that determined how the Office worked. There was the person and historical context:

President Mandela, a man of unique moral authority and international stature, has had to fulfill a particular, historically unique function in our transition. He is the one individual person upon whom it can be said the success of the transition rests. This challenge has been fulfilled by an enormous devotion to the people of South Africa - black and white, poor and rich, rural and urban, women and men, young and old - talking to them, meeting them, intervening in their problems, inspiring them, consoling them, standing above the petty conflicts uniting them, giving them a dignified sense of a new collective self above and beyond their divisions and differences, by being available, mentally and physically to them.

There was the constitutional context:

... South Africa operates on a Cabinet system . ...in which the President is not an employer to the members of the Cabinet, but acts with them as a ‘primus inter pares’, and on whom he must rely for counsel and even approval.

This President has consciously avoided the creation of an unwieldy bureau of advisors to supplement (and potentially supplant) the role of the Cabinet; and has not surrounded himself with bureaucrats and technocrats guiding, presenting and promoting him and seeking to direct his Ministers...

The President worked with a party political context:

Our President, at the same time as remaining the most studious and dedicated advocate and practitioner of genuine consensus-seeking in a multi-party government of national unity, has insisted on the democratic principle of the primacy of the political party, and insists that he is an agent of that party. He consults his own party leadership, on a regular basis to obtain advice and views on the issues facing South Africa. He has not sought to mediate that relationship. As his Office had not been designed to supplant his relationship with his Ministers, neither does it impose itself between the President and his Party. ...

And finally, there was the social context.

The previous dispensation was not only profoundly undemocratic, it was characterised by political tensions, lack of unity, violent conflict, paralysing poverty, an economy in serious decline and stark inequalities in the allocation of social resources.

The situation immediately following the assumption of office by the Government was also characterised by a potent mixture of political and criminal violence in certain areas of the country, as well as considerable uncertainty and suspicion regarding the intentions of the ANC amongst various sectors of South African society and certain members of the international community.

This situation stressed the importance of creating political legitimacy for the new government amongst all sectors of our people, neutralising any forces intent on violence, generating loyalty to the government by the civil service, especially the security establishment and preventing any serious capital and skills drain.

Hence a major plank of the GNU was the promotion of national reconciliation and unity. The achievement of this goal relied heavily on the person of the President and the goodwill he generated amongst all sectors of the population since his release from prison.

Central to the mandate of the GNU has been the programme of reconstruction and development to address the social and economic legacy of the past in the form of poverty, social inequalities and imbalances. Success in achieving the goal of national reconciliation and unity depended on this. RDP socio-economic projects, managed initially through our Office, also received and continues to receive the ongoing attention of the President. The RDP is the yard-stick the President uses to measure the achievement of government departments.104

Such were the factors shaping an office of the country's chief executive that would evolve with experience, new demands and changing circumstances but reflecting the nature and style of the incumbent.

Gerwel concluded by responding directly to the commission’s concern about coordination, recapitulating the multifaceted and varied elements in the complex process of co-ordination of policy and implementation. The list included both elements directly related to Mandela’s personality and style – including public communication and interaction with communities as well as direct supervision of those state functions to which he attached priority, in particular peace and stability – and elements filling the gaps he left, namely systems and structures which he delegated to Thabo Mbeki to coordinate and integrate policy and its implementation: in the presidency, in Cabinet and across the spheres of government.

In the commission’s report this analysis was reduced to the proposition that ‘the nature of this office was not only characterised by the core requirements of the public service but also reflected the personality of the current incumbent.’ While ‘this may well have been necessary in South Africa in the exigencies of the 1994 transition’, the long-term required ‘a more structural approach’.