When Mandela told the ANC caucus that he wanted to be in close contact with Parliament’s portfolio committees, the new and more assertive role of committees was becoming manifest. It was also a time when the balance between ministers – as members of the executive – and portfolio committees – as part of the legislature – was in the public eye.

One of the most consequential changes that the new parliamentary system brought was in its committees. The old apartheid committee system, as an observer put it, ‘was a joke: one clerk served five committees which met in secret to rubber stamp the executive’s laws and policies.’ The new system, ‘was the most exciting development in the evolution of parliament since 1994, and at its best it is as strong as virtually any other parliament in the world. The committee system is underwritten by the Constitution . ...Sections 55-57 provide for the role of committees: parliament must create mechanisms to hold the executive to account; the committees have the authority to receive evidence and summon witnesses; they must facilitate public participation the parliamentary process.’310

In this context, finding the balance between the prerogatives of ministers and the rights of parliamentary committees headed by leaders from the same party, and ensuring that they complemented one another meant navigating some testing incidents without precedents. At times Mandela felt the need to persuade ministers to work more closely with committees; and at times it was a matter of persuading committees to find the balance.

An example of the latter kind followed a heated exchange at the portfolio committee on defence with the head of the defence force, General Meiring, during committee hearings in January1996 on legislation relating to integration of the armed forces, including a proposal that English be the sole language in the integrated force. When Mandela heard about the incident he told Meiring to ‘ignore that because there must be a proper discussion before we introduce issues of that nature.’311

At the next caucus meeting, Mandela harshly upbraided ANC members of the committee, for proposing a policy which he said ran counter to the reconciliation efforts of the ANC and the Government of National Unity.312

Pressure in the other direction, for greater ministerial cooperation with a portfolio committee, came about when Mandela acted to bring together the IFP minister for correctional services, who was refusing to meet his portfolio committee, and the chair of the committee, Carl Niehaus. 313 A year later Niehaus complained to Mandela that relations had again broken down and Mandela again intervened.314 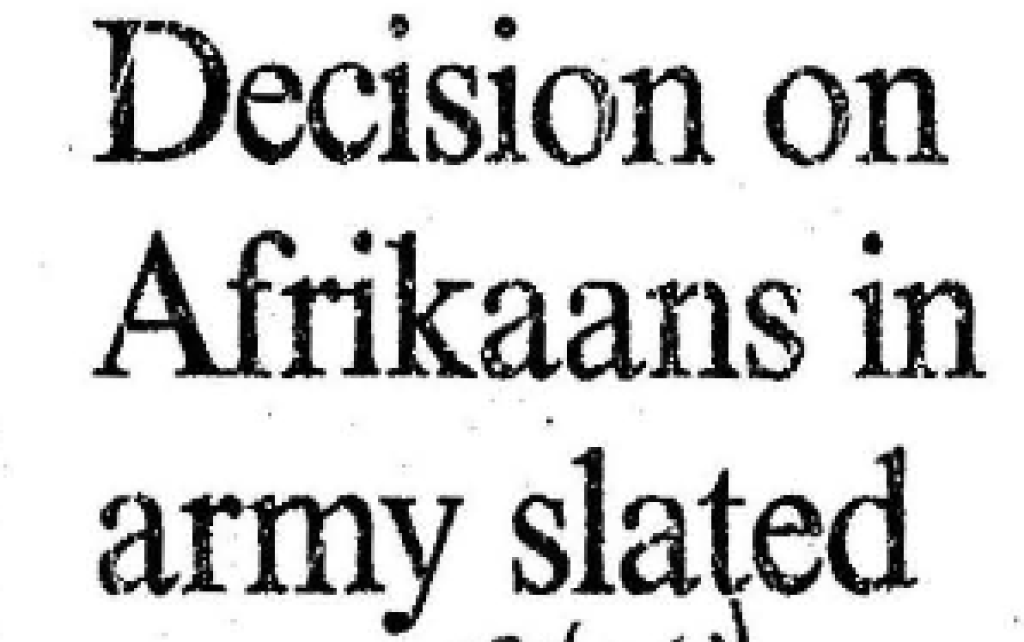 Another intervention from the presidency came when the portfolio committee on social welfare was holding hearings on government’s proposal for a child support grant that would be available equally to all in place of the previous racially based maintenance grant. But though it would be universal it would be lower in order to extend it to all eligible Africans.315

Non-governmental organisations took the opportunity to campaign for a higher grant than was proposed and persuaded the committee and the ANC Caucus. With Minister Fraser-Moleketi standing fast on the initial proposal, and the campaign sustaining its pressure, the ANC NEC agreed some increase in the grant316 based on an agreement that was apparently brokered by Essop Pahad, Deputy President Thabo Mbeki’s parliamentary councillor.317

Probably the most intense focus on the relation between the executive and committees was cast when portfolio committee on health held an inquiry into issues related to the procurement process of the AIDS prevention musical, Sarafina II.

In the context of ongoing tension between the committee on the one hand and the department and ministry of health on the other, together with intense public interest in the matter, Mandela was keen that the matter ‘be handled judiciously’. He spoke to the committee chair to get the committee’s view and later to the minister.318 The minister explained the project and the process and said that she would resign if he thought she had done wrong – he said he did not think she had done wrong. Nothing he said to her suggested that he had asked, or would ask, the committee chair to halt the hearings.319

If you think I was wrong I’m ready to resign, I don’t want to put you into trouble

A report in the Business Day today (26/2/96) alleging that Deputy President Thabo Mbeki intervened to reinstate an inquiry by the Parliamentary Health Portfolio Committee into a contract to produce a drama focusing on Aids awareness contains various factual inaccuracies and is misleading.

Contrary to the Business Day's allegations, there was no instruction from President Mandela to the Committee to cancel a meeting which was to be addressed by the Minister of Health Nkosazana Zuma, wherein she was to give a report into the process of awarding the contract.

Deputy President Mbeki's intervention was a follow-up on the President's initiative to ensure that the matter be resolved without needless public wrangling based on speculation rather than fact.

Both the Offices of the President and the Deputy President would like to reiterate the absolute importance of the separation of the legislative and executive arms of government. The imperative of the parliamentary structures in resolving the question at hand derives from the principle guiding all modern democracies.

Equally important is the need to ensure that the discussions of the Minister, the Department of Health and the Portfolio Committee are not pre-empted.321

The matter dragged on for another two years. It was referred to the Public Protector, who exonerated the minister from financial liability; 322 and to the Special Investigations Unit led by Judge Heath which in April 1999 announced that it dropped the case against the minister which it had concluded it would not win.323